Outback to Get Aircraft Graveyard

Outback to Get Aircraft Graveyard 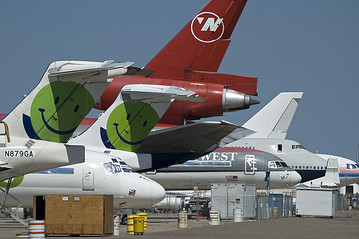 Alice Springs Airport said Friday that it signed a lease agreement for a 100-hectare aircraft storage and recycling facility???big enough to accommodate up to 300 aircraft. Old jets have long ended their days in massive “boneyards” in Arizona, California and New Mexico, where they are stripped of parts for recycling. One of the largest for commercial planes is the Pinal Airpark in Arizona, which covers more than 800 hectares. Even larger spaces in Arizona and California handle military planes and spacecraft.

Asia airlines are growing at a faster rate than their European and U.S. rivals, the region having recovered at a faster rate from the global financial crisis. Boeing Co. forecasts that half of the world’s new air traffic over the next 20 years will be to, from, or within the Asia-Pacific region, and that the region’s airlines will need 10,320 new airplanes over the period. As that parade of new planes comes in, a growing number of retiring old planes will require dismantling. 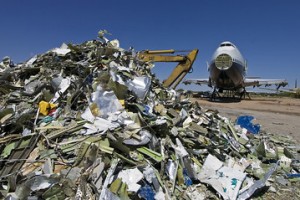 A 747 gradually gives up its aluminum at an Arizona aircraft graveyard. GARY WILLIAMS/GETTY IMAGES

The Alice Springs site will also provide a temporary storage space for planes not immediately needed by carriers. Deserts, which are low in rust- and corrosion-causing moisture, are the best place for aircraft preservation.

Construction of the project’s first stage, including a taxiway and defueling pad, will begin in the second half of 2011, said Katie Cooper, the general manager for Alice Springs Airport, with a goal of finishing by year-end.

“There could be some constraints laying bitumen,” she cautioned, “just because of how hot the Alice gets.”

Write to Ross Kelly at ross.kelly@dowjones.com